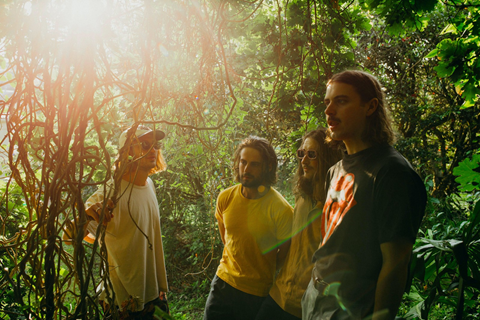 AUCKLAND, NZ (Oct 19, 2020) – Rising indie rockers and band of brothers Daily J have today announced a national tour in support of their upcoming debut album ‘Venus Ate Mars’, consisting of a rescheduled date for their previously announced Auckland show as well as additional dates in Wellington and Christchurch. The tour kicks off in Wellington on November 27.

Hailing from the deep-rooted back lands of Blenheim, now-Auckland-based Daily J have constructed their own unique sound, offering blissful blends of warm swirling melodies, dynamic basslines and a subtle pop electronica influence.

The talented band of brothers consists of Jayden on vocals/guitar, Jesse on sax/keys, Jonny on bass, plus their buddies Cody on lead guitar and Rick on drums. The Venus Ate Mars album will include crowd favorites such as 'Left Me Like Summer' and recent singles 'Rocket', 'Skylah', and fresh groove 'Sunshine Hides' (single out October 30th). The new LP from the Auckland based Daily J is full of highs, lows and all that is in between. This is deepened by a strong progression into a world of thoughts and wonderings of the absurd, alongside the sweet and catchy melodies that the band has never failed to deliver. Prepare for music that will have the audience under the Daily J spell and lost in musical pleasure.

Pop-raunch-rock act Nicholas Franchise will join in support duties in Auckland and Wellington. Despite the name they are in fact a four-piece band, and released their debut album in 2018. With a history spanning from formation in Dunedin, relocating to the USA and then back again, the band will be travelling across New Zealand for this special tour.

WITH SUPPORT FROM NICHOLAS FRANCHISE IN AKL & WGTN

#KEEPYOURDIS-DANCE: New Aussie And Kiwi Releases To Listen To This Week

5th May, 2021 - Independent New Zealand artist Georgia Lines is off...

5th May, 2021 - As social distancing continues in this time of uncertainty,...
x